The Mekupelet chocolate bar has served as an inspiration to Israeli musicians and writers, fans have opened a dedicated Facebook group, and there's a never-ending discussion about the best way to eat it…

Mekupelet's uniqueness is in its texture and its unusual shape – it resembles thinly folded chocolate. Its texture, which crumbles when eaten, leaving crumbs at the bottom of the pack, led to the creation of an advertising concept that is based on a consumer truth – whoever eats a Mekupelet must finish every last crumb left in the wrapper…

On the basis of this insight, in 1992 the commercial starring former model Orly Levy was aired, accompanied by the slogan, "Mekupelet – down to the last crumb". Until this very day, many discussion groups are occupied with the question, how to eat the chocolate bar. Bite after bite, or crumble it in the wrapper and then toss the fragments into your mouth, or perhaps freeze it to enjoy a chilly texture that crackles in your mouth.

The secret behind the manufacture of Mekupelet has been kept until this very day, and its special recipe and production process are a company trade secret. The bar is manufactured in a special wing in Elite's production site in Nazareth, and only employees with special authorization are permitted to enter.

There is no other chocolate bar In Israel with similar characteristics. Many have tried to crack the secret of its production, and there are thousands of recipes on the Internet suggesting ways of preparing the homemade version. A Google search (in Hebrew) for the "Mekupelet recipe" yields 57,000 results containing recipes and cooking and baking discussion forums.

For more information about the brand press here 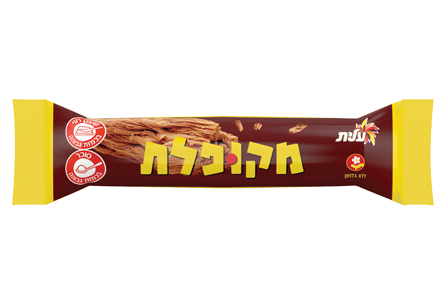 Mini Mekupelet Family Pack
The classic favorite in a miniature version, in a bag that contains enough for the whole family.