When you love nature, nature loves you back

At Yad Mordechai we have two great loves: man and the land. Our love of man was absorbed in the place where we were born and stems from the values on which we were raised. Our love of the land is an emotional bond with nature – animate and inanimate alike.

The smell of freshly ploughed earth that sends shivers down your spine, the excitement of a new shoot as it penetrates the surface of the soil, the flow of the seasons, the fruit ripening on the trees, the gratitude and happiness when the beneficial rains come, the daily care and concern. It is a bond that grows stronger as the years go by, a bond that is passed down from one generation to the next, roots that are deeply implanted in the soil. We work the land to feed mankind. When you love your fellow man, your work is a labor of love. You always do your best, never forgetting for a moment that the fruit of the earth that you are cultivating is something that people put in their bodies.

Picking a ripe fruit from the tree is not something we take for granted. Every time a bee takes nectar from a flower we feel the wonder. When the rains come on time and water the olive groves our hearts sing. This gratitude and reverence for the forces of nature and the fruit of the earth are part of our everyday lives as we go about our business, and they are something we want to share with you. We invite you to experience nature and its abundance. Because we believe that when you love nature, nature loves you back.

Yad Mordechai is one of the three leading brands in the Israeli jam market and is active mainly in the confitures segment, where it has a 16% market share. confitures differ from jam as they contain 100% fruit and no sugar. Yad Mordechai is a familiar favorite in the category, and consumer perceptions about the brand and its products are expressed in the feedback we have received in consumer surveys: "A manufacturer you can trust", "High-quality, natural, healthy products". 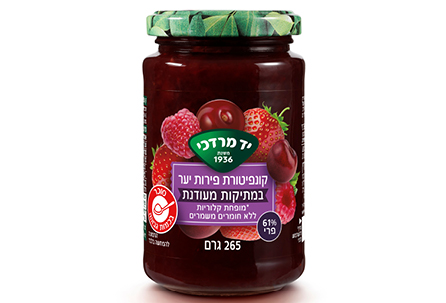 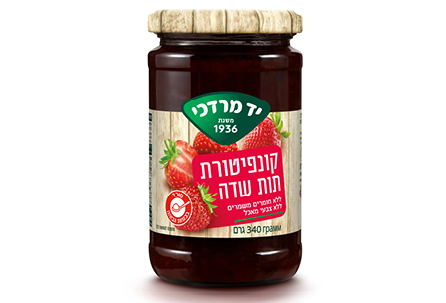 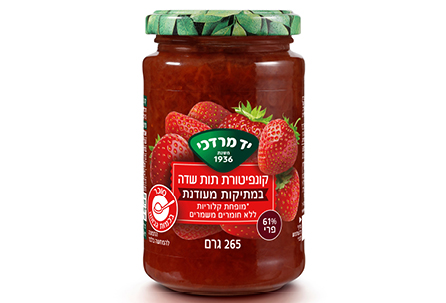 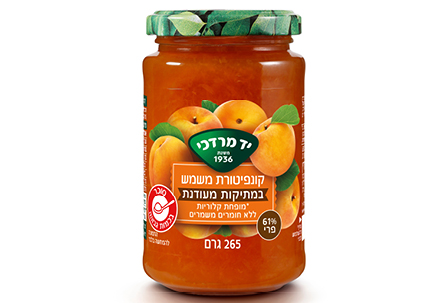 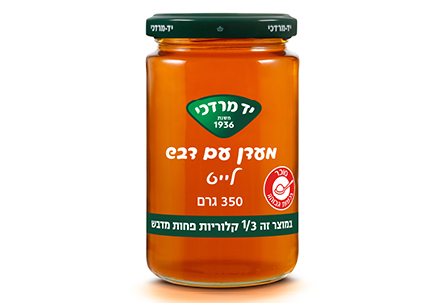 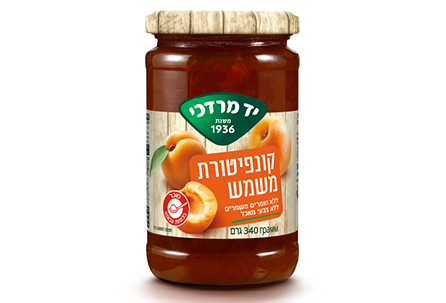 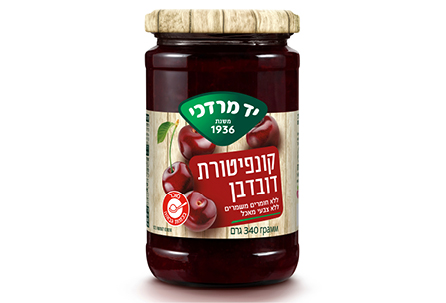 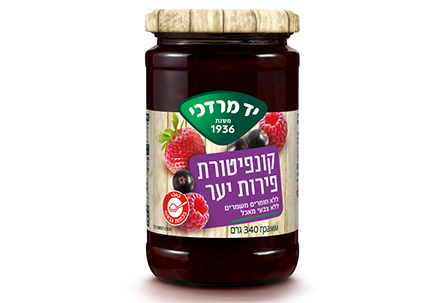 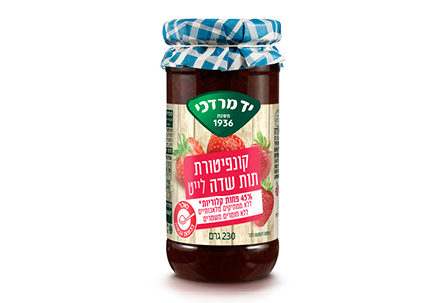 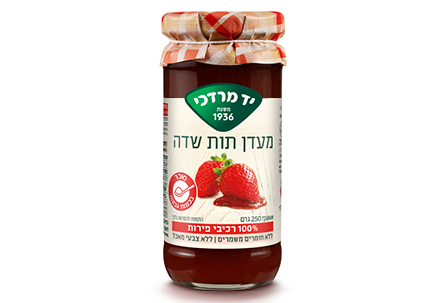 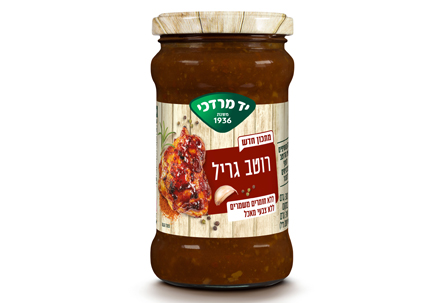 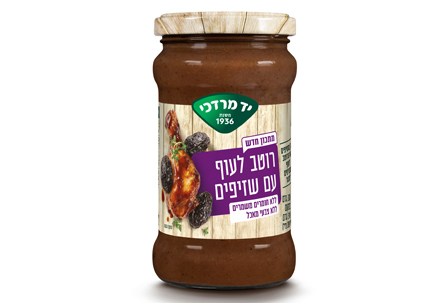 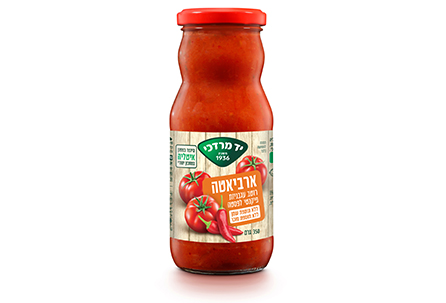 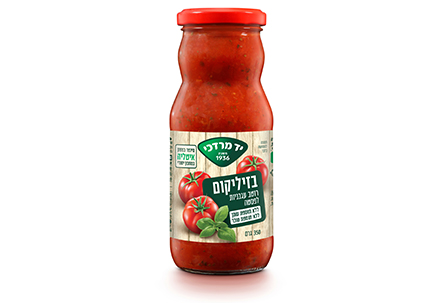 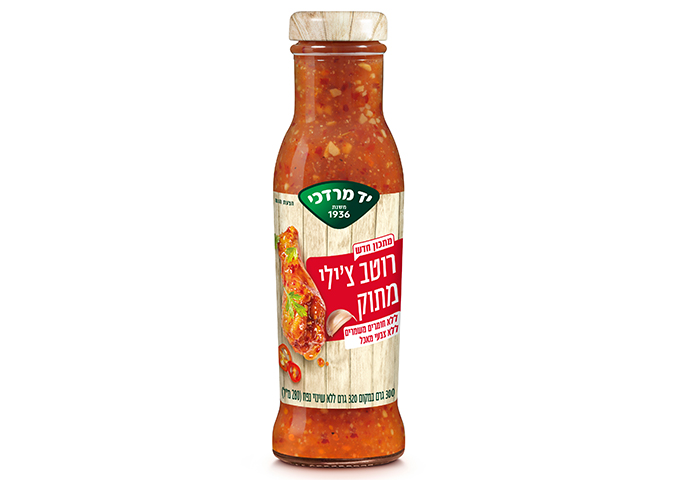 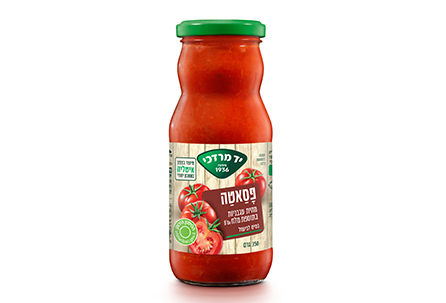 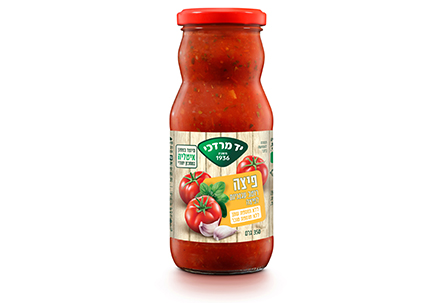 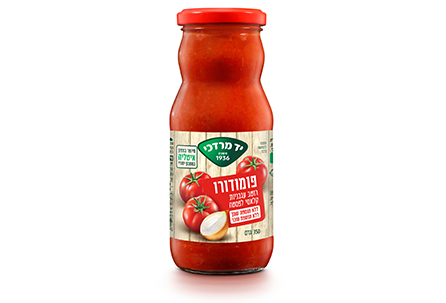 "Honey means Yad Mordechai". With a 60% market share, Yad Mordechai is the leading brand in the Israeli honey market. Our apiary is the largest in the Middle East. Our honey undergoes the most stringent control processes and has been awarded the Standards Institution of Israel's Gold Label as a token of esteem and in recognition of outstanding quality in the production and management of honey. 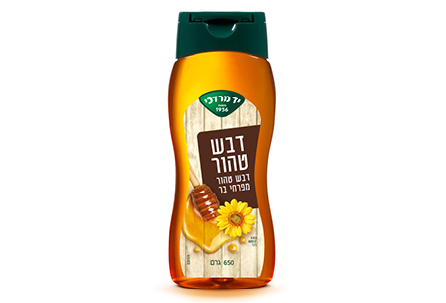 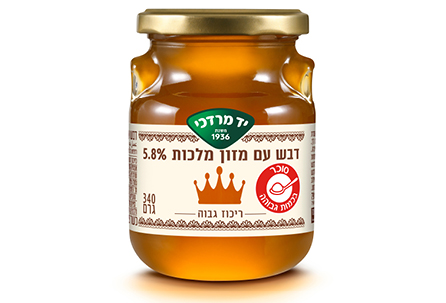 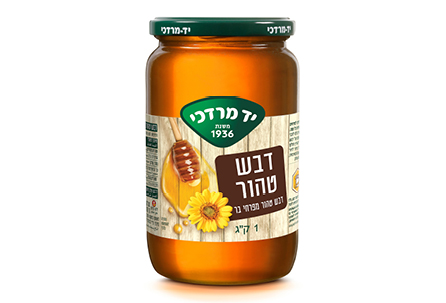 Bar Flower Glass
Yad Mordechai's expertise and commitment are expressed in our guarantee for the quality and taste of our olive oil. To make good on our promise, we have a team of tasters certified by the International Olive Council (IOC), who classify the oils according to their tastes and aromas. Our olive oils are offered to consumers in three flavor strengths: 1 = Mild; 2 = Classic; 3 = Intense. 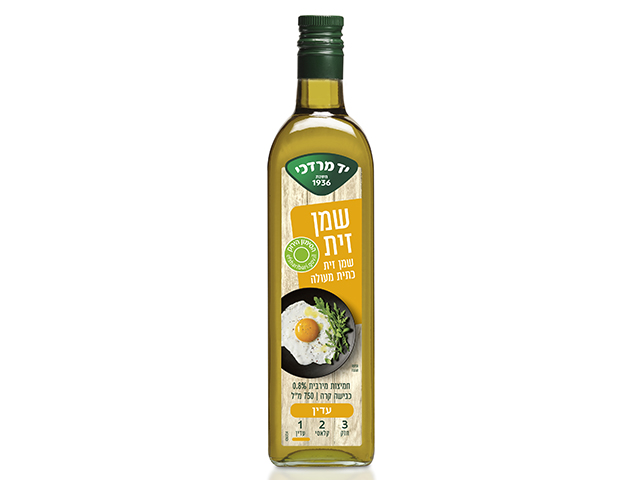 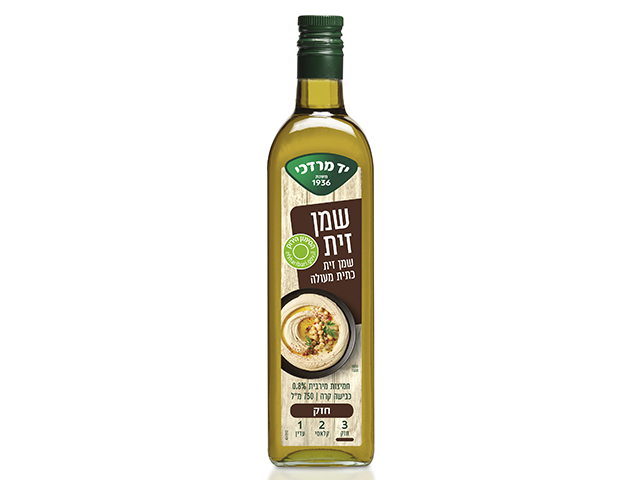 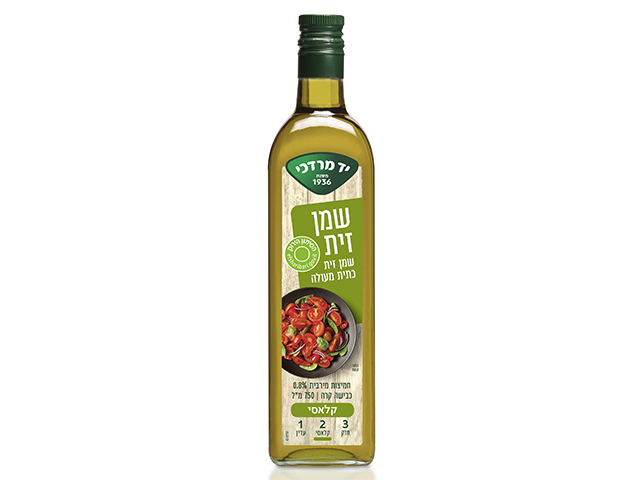 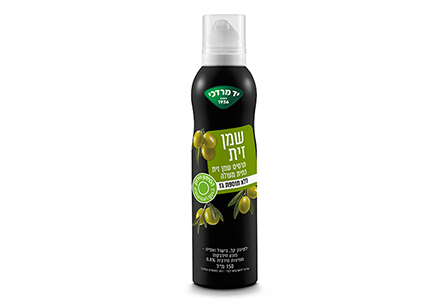 Always the innovator, Yad Mordechai now offers consumers another product that will add an extra, natural touch of enhanced flavor to the food you serve – high-quality, tasty, kosher balsamic vinegar. Our balsamic vinegar is "three grape" quality – a level that is superior to what you will find among the vinegars offered on the supermarket shelf. This quality is expressed in both the composition and flavor of the product. Balsamic vinegar is made exclusively of wine vinegar and grape must, and contains no food coloring (caramel). It is balanced in taste, and the professional jargon defines it as slightly sweet and harmonious. The vinegar is aged in oak casks and manufactured in collaboration with a leading manufacturer of Modena, Italy, where genuine balsamic vinegar first originated and is traditionally produced. 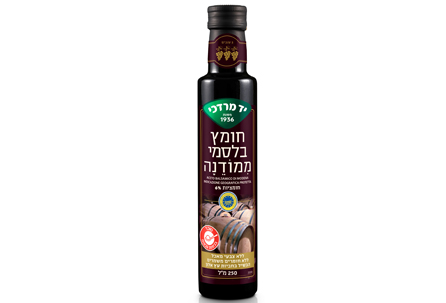 1936
The agricultural apiary is established
The Yad Mordechai Apiary is among the pioneers of the Israeli honey industry and a leading manufacturer of natural food products. The apiary started out in 1936, when the kibbutz founders learned the secrets of beekeeping from Australian and British soldiers who were stationed in Israel. When the kibbutz was formally established beekeeping became its main activity, and the pure honey was soon distributed throughout the state in the making.
1943
The Warsaw Ghetto Uprising. The Kibbutz took its current name
In 1943, after the Warsaw Ghetto Uprising, the kibbutz took the name of Mordechai Anieliewicz, leader of the Jewish Combat Organization during the Uprising, and the apiary was christened "Yad Mordechai Apiary".
1948
The War of Independence. The battle. The apiary develops.
After the War of Independence, during which the kibbutz was attacked by Egypt in the famous Battle of Yad Mordechai, building and development of Kibbutz Yad Mordechai gained momentum. New branches of agriculture were established, and the young apiary began to consolidate its position as leader of the honey industry in Israel. Innovative methods were learnt, a sophisticated honey collection center was established, the number of hives increased, and advanced quality control techniques were adopted. The number of hives grew from a few dozen to over four thousand, and the honey business expanded into other apiary products. The apiary's promise of pure, high quality honey spread quickly, and Yad Mordechai Honey became the most widely sold, well-known honey in Israel.
1986
The separation
The commercial apiary is separated from the agricultural apiary
1991
The "Honey Decade"
In 1991 the apiary inaugurated its development and innovation center, which includes a research laboratory for the study and development of choice honey products. The center applies the vast knowledge accumulated by the apiary as well as an understanding of the Israeli consumer, his tastes and preferences. This knowledge has led to the development and launch of the species series, royal jelly in pure honey products, honey with hazelnuts and almonds, honey in assorted flavors, and other apiary products (such as propolis).
1997
Natural health products and food supplements
In 1997 a line of natural health products based on the products of the apiary was launched.
2000
The squeeze bottle
In 2000, for the first time in Israel, a squeeze bottle with a patented cap was launched.
2001
Partnership
The apiary looks for a strategic partner
2003
Elite acquires 51% of the apiary
Following its growth and expansion, in 2002 the apiary decided to introduce a partner to the business and thus facilitate the company's continued development. And so, in January 2003, the company Elite (today Strauss) acquired 51% of the ownership of Yad Mordechai Apiary, enabling it to continue to develop into new areas, while the kibbutz retained a 49% ownership stake and full partnership in managing the business.
2004
Rebranding. The promise – "A natural consumption experience". Entry into the oil olive category
In 2004, after many long exciting months of preparations, the apiary began to manufacture and market superior olive oil. From the very first moment, tradition, experience and love of nature were expressed in every bottle. The production facility was expanded to include the olive oil business, and a state-of-the-art olive oil laboratory established. Since then, at every olive harvest over ten different olive varieties are picked, each with its own typical taste and aroma profiles. Today Yad Mordechai is considered Israel's leading, finest quality olive oil producer, and we continue to invest great efforts in learning about and developing the sphere, our goal being to offer consumers a top quality olive oil experience.
2005
Entry into the confitures business. The Yad Mordechai brand is established as an umbrella brand in the natural foods segment
In 2005 the Yad Mordechai Apiary began to manufacture and market 100% pure confitures. These delicacies are made by cooking natural fruit with fructose, with no white sugar, flavoring agents or any other additives. To develop the new category a great deal of knowledge in quality fruit was acquired and connections established with new partners on the product journey – quality fruit growers in Israel, from the strawberry growers of the northern Sharon Plain to the plum growers of the Upper Galilee.
2009
From 2009 to the present day
Today, the apiary manufactures and markets some 200 honey, olive oil and confiture products. All of them express our love for nature and for the people who work in it. The sophisticated production site at Kibbutz Yad Mordechai employs around 40 people, all of them inhabitants of the region. The basic values of the apiary and its employees are those very same values that have held hard and fast for decades. They are the basis for our efforts to guarantee to you that we will derive the very best from what nature has to offer us, and deliver a genuine experience and enjoyment of this wondrous abundance.