He will be replacing Tomer Harpaz, who has recently announced his desire to take a year off

President and CEO of Strauss Group Giora Bardea announced today the appointment of Joey Bergstein as president and CEO of the international dips and spreads company Sabra-Obela.
Bergstein will take office in early August 2021, taking over from Tomer Harpaz, who recently announced his desire to take a year off, after 3 years in this role and 11 years in the Strauss Group.

Bergstein will be joining the Strauss Group from the Seventh Generation, a leading household and personal care products company and pioneer in the environmentally conscious products space, which is a fully-owned subsidiary of Unilever. He joined Seventh Generation in 2011 and became CEO in 2017. Since his appointment, he has successfully led the organization, doubling the company’s revenue and expanding its operations to over 30 countries, while developing its reputation as a sustainability-driven innovation company. Joey, a graduate of the School of Business Administration from the University of Western Ontario, began his professional career at the Procter & Gamble Group, followed by senior roles at the Molson Coors Beverage Company and at Diageo.
“We welcome Joey as he joins Sabra’s fascinating journey,” Bardea said. “As a transformational leader in his previous roles, and especially in his most recent role as the Seventh Generation CEO, I am confident that Joey will lead Sabra and Obela to continued growth and development while combining his commitment to sustainability, social responsibility and a healthy and balanced diet. This is another opportunity for me to thank Tomer for his extraordinary contribution to the company, and for his leadership as CEO over the past three years.”

“Sabra’s portfolio sits naturally at the intersection of better-for-you food and sustainability, two areas of personal passion,” said Joey Bergstein, incoming Sabra CEO. “Building on Sabra’s remarkable success, we have an enormous opportunity to satisfy people’s desire for delicious and accessible foods while helping to foster a more sustainable future. As a longtime fan of Sabra, I look forward to working with an outstanding team to grow an iconic plant-based food brand.”

Sabra and Obela, jointly owned by the Strauss Group and PepsiCo, develop, manufacture, sell, market and distribute healthy, tasty and accessible plant-based cold dips and spreads, in those markets which are always on the lookout for more sustainable and better-quality food solutions. Sabra operates in the US and Canada, and Obela operates in Mexico, Australia, New Zealand and Western Europe. Both Sabra’s and Obela’s activity is managed through a joint venture between the Strauss Group and PepsiCo, which own 50% each. Sabra had revenue of NIS 1.3 billion in 2020, and Obela closed 2020 with a revenue of NIS 163 million. 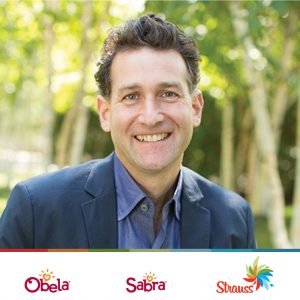